The state of Western Australia has announced that girls at public schools will be given the choice to wear pants and shorts to class, as well as skirts and dresses.

On 3 September 2017, the Education Department of Western Australia announced it would make changes to a statewide dress code, allowing girls enrolled in public schools to have more uniform options. Victoria has followed suit, with Education Minister James Merlino announcing in a statement on 11 September that this is “something I would expect all government schools to do.”

School councils in Victoria make sanctions for their school’s dress code, however some still require girls to wear skirts and dresses.

Mr Merlino said all schools “must adhere to human rights and anti-discrimination requirements.”

Some Christian day schools have been known to have a strict dress-only policy, due to modesty or religious reasons.

Madison Stefanis is in Year 11 at an independent Christian girls school in Toorak, Victoria.

“We hardly do anything even moderately religious,” Stefanis says, “but we still are not allowed to wear pants.”

Stefanis has admitted to feeling restricted by the dress code, in relation to playing sports. This has been a common complaint for other students who are actively involved in sports.

Girls’ Uniform Agenda is an Australia wide group and campaigns for girls to have the option to wear shorts as part of their uniform. A paper prepared by co-founders, Dr Amanda Mergler (QLD) and Ms Simone Cariss (VIC), states that in an Australian study that looked at children’s perceptions of the factors that impact on their ability to engage in lunchtime play at school, 10 to 13 year-old girls reported that their uniform was a factor. Boys did not mention uniform at all during the study. Uniform was noted as a restriction to doing certain types of activities, such as basketball. (Stanley, Boshoff & Dollman, 2012).

Most education departments allow individual schools to regulate their own dress code, though they typically have a provision that the guidelines must comply with anti-discrimination policies.

The modification does not apply for private schools, however many private schools in Perth have since announced their intention to change their dress code. 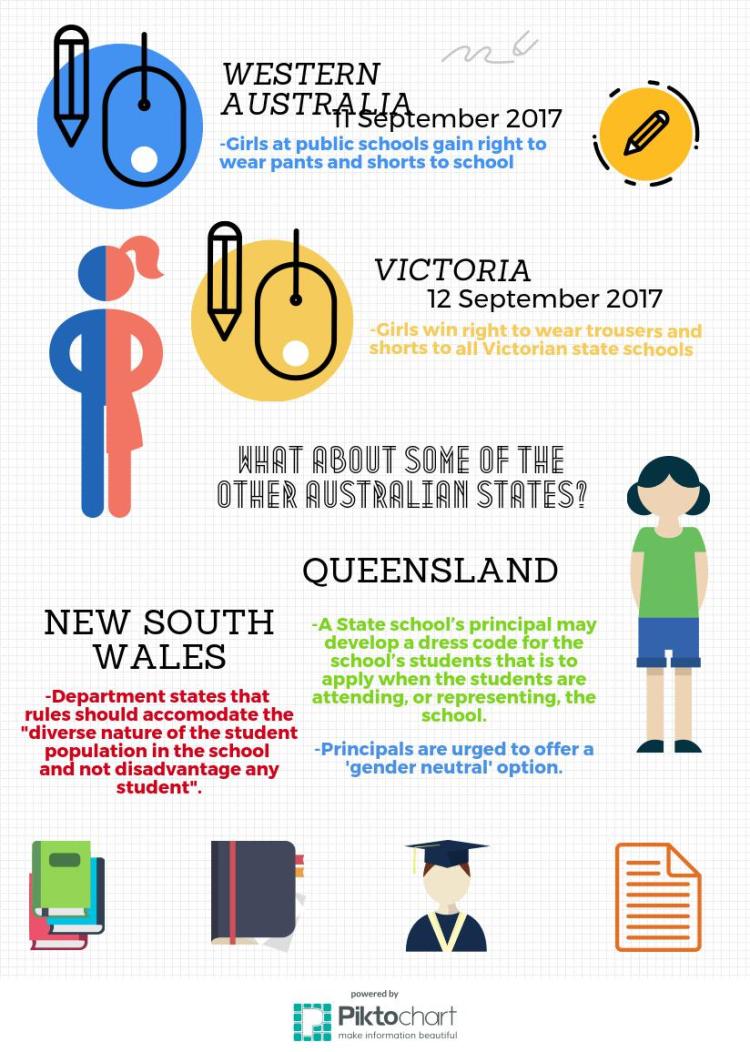